In addition to helping LIGO detect gravitational waves, our rotation sensors have found an unique application in surface wave seismology. When an earthquake happens it emits two types of waves: body wave which travel through the interior of the earth and surface waves that travel along the surface. Of these surfaces waves there are two polarizations: Love waves which have only horizontal motion travelling like a snake slithers and Rayleigh waves which have both vertical and horizontal motion that resembles waves on the surface of water. 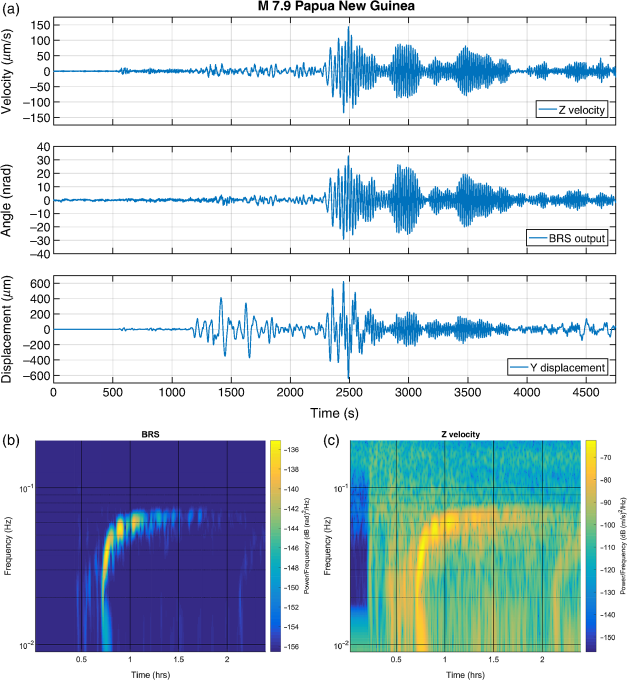 Since our rotation sensors sense the spatial gradient, or tilt, of the ground, they are sensitive to primarily Rayleigh waves which allows us to measure these waves in a fundamentally new way. Shown below are the equations for the vertical displacement (u_z) and the tilt components (theta) of a Rayleigh plane wave.

Combining our measurements with a nearby seismometer allows us to extract the waves phase velocity (nu) and direction of propagation (psi) from the measurements at a single station. Without a rotation sensors one would need an array of seismometers to obtain this same information. Additionally, since the phase velocity is dependent on the properties of the ground (namely density), these measurements could allow for subsurface imaging with spatial resolution only limited by the size of the instruments.

Rotational seismology is a blossoming field and we expect these measurements to find further seismic applications in the future.